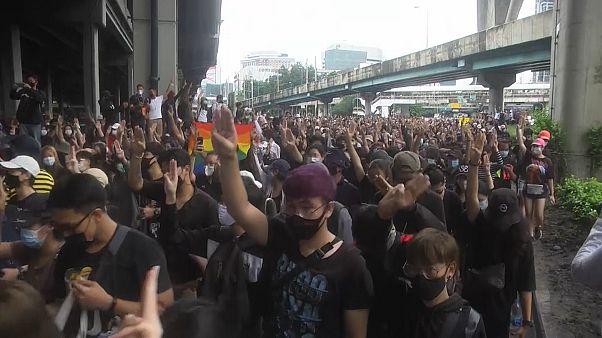 Thai protesters back on Bangkok's streets in defiance of police

Thousands of young Thai protesters returned to the streets of Bangkok on Saturday, a day after riot police used water cannon to break up a rally in the centre of the city.

Using several rally points outside the centre, they gathered to once again press their political demands, including the contentious and explosive issue of reform of the traditionally revered monarchy.

More than a thousand people gathered at the foot of Udom Suk skytrain station, in eastern Bangkok, before marching on to a major road junction.

Earlier, in a bid to disrupt their ability to reach rallying points, authorities closed much of the mass transit system, leading to angry protesters staging impromptu demonstrations on concourses.

Once venues were announced through social media, protest organisers gave out taxi money so participants could get around the shut-down.

By late afternoon there had been no decisive move by the police.

On Friday night, officers in riot gear, backed by prolonged bursts from water cannon, forced out thousands of protesters from a road junction in the city centre.

But the violent response did not deter a 26-year-old hotel worker who called herself Veronica.

"Right now we can do nothing much. What we can do right now is only show our power to let the outside see," she said.

A 20-year-old student who used the name "Ryo", said Friday night's events had hardened his resistance.

"I respect people's political opinions but after yesterday's incident, I feel it was so harsh, perpetrating violence against unarmed people who had no weapons to fight back," he said.

Cat rescued from inside electric cable casing by Turkish firefighters