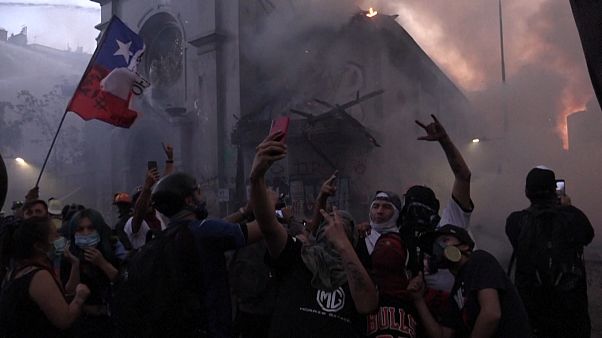 Clashes erupted between some protesters and police as thousands of people on Sunday demonstrated in Santiago to mark the anniversary of the movement that led to massive protests in 2019.

Police used water cannons and tear gas to disperse protesters during the protest in the Chilean capital.

The demonstration, organised by groups anonymously on social networks, took place under strict police surveillance to prevent disorder and riots.

In the lead up to the anniversary, authorities deployed 40,000 of the total 60,000 troops onto streets across the nation.

Last year's ongoing street demonstrations shook political power and prompted a constitutional plebiscite to replace the constitution from the past military dictatorship.

The protests started with students demonstrating against a subway fare hike before the social outbreak on 18 October 2019, which brought to light deep discontent with social inequalities.

A plebiscite will be held on October 25 in which up to 14.7 million Chileans will decide whether to change the Constitution which was drafted during the country's military dictatorship.

France rules limit in places of worship too restrictive

Shops in France allowed to reopen after coronavirus lockdown eased