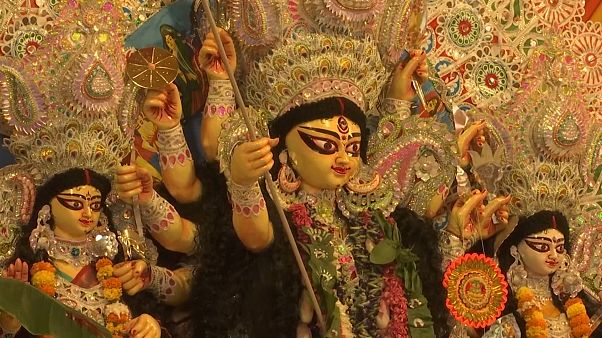 Hindu festival season scaled down due to coronavirus

The colourful Hindu festivals of Durga Puja and Dussehra have been scaled down this year in India, amid fears among health experts that the festive season might lead to a cascade of new coronavirus infections.

With muted celebrations, prayers have gone virtual, and organizers are live-streaming sessions for devotees.

Food blessed by the goddess Durga is being home-delivered so people don't have to gather to pick it up.

In many states, police barricades have been erected around the usually buzzing places of worship to avoid large gatherings.

India has the world's second-largest number of confirmed coronavirus cases, after the United States.

Last month, the country hit a peak of nearly 100,000 cases in a single day, but since then daily cases have fallen by about half and deaths by about a third.

Soon, almost 1 billion Indians will celebrate Diwali, the Hindu festival of light, with socialising an intrinsic feature of the celebrations.

Even though the government is expecting consumer spending to take off during the festival, which in turn could help to resuscitate the ailing economy, it is also worried about people packing together, forgoing social distancing and masks.

Prime Minister Narendra Modi warned earlier this week in a televised speech that "any laxity" during the season "could strain India's health system."

Anita Haldar, a Durga Puja organizing committee member in New Delhi, said this year, everyone is asking the goddess for the same thing.

"Everybody has their own problems and they always come to the goddess and ask for help, but this time we are all equal, we are asking to get rid of COVID."

France rules limit in places of worship too restrictive

Shops in France allowed to reopen after coronavirus lockdown eased